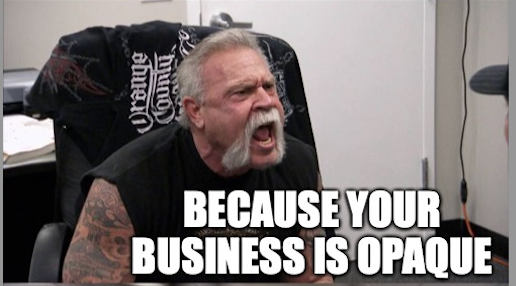 What does it really mean for your business to be opaque? …..Story Time.

In 2005 when I was in grade 6, we had tuition during the holidays organized by one of the teachers at a small fee. After a week, I was sent home because I had not paid the tuition fee and had to go and hustle for some funds (hustling then meant weeding at a farm or burning charcoal to sell). When I came back, I found out that a lot had been taught and one of them in Science were the concepts of transparent, translucent and opaque materials. That was the first time I heard those 3 words; opaque materials were simply defined as things we can’t see through such as our classroom wall – of course we later learned in engineering school that these were materials that absorbed all the wavelengths of light (and that’s the reason why we couldn’t see through them).

Fast forward to last year when I visited my parents and my mum literally forced me to accompany her to the shop, see how it operates and help out a little bit. I’m overly observant and so I couldn’t help but notice a lot of opaqueness in the business. She didn’t know a lot of things I inquired about: what their profits were, what the value of stock was, whether they were eating into capital meant for restocking or not. The worst of all was when she was struggling to tell whether “min L”  (name withheld) had cleared their debt. She had been selling to a lot of people with the promise of being paid later but she didn’t keep proper tabs on them and didn’t know how much was still held outside. I realized the magnitude of the effect of this problem when she said the supplier was to come back in 3 days time but she didn’t have enough money to pay for the restocking. “How can you not have enough money yet you’re restocking for what you’ve already sold – at a profit?” Well, turns out when you haven’t collected much of what your customers owe you when you’re operating on margins as thin as 5%, then it not only wipes out your margins but also capital to an extent that you can’t even restock.

“So bad has the loss of funds been at the neighbor’s minimart that he recently closed down.” Mum told me. That was the eureka moment, the moment of awakening, the opaqueness we are talking about. The problem with small business opaqueness is that you not only lose funds but when you need to get a loan to resuscitate the business from banks, you hardly qualify because, again, your business is opaque and they can’t even do credit rating for you. You’re left in a fix and no option but to close down the only source of the family’s livelihoods.

Thanks to eureka moments such as this, Patika now comes to remove this opaqueness by focusing on the biggest problem of managing pending payments. To ensure that every small business, at any given point, knows which customer has pending payments, their payment history and balances as well as helping them get paid 3x faster. By doing this, small businesses like my mum’s will no longer struggle with cash flow constraints caused by delayed and non payments. The name Patika itself means to be findable which basically means we are removing the opaqueness that’s making small businesses not to be seen and found.

To all the small business owners in Africa, I just wanna conclude by saying “Sawabona” – We see you, we respect you, we value you, you are important and are the backbone of Africa’s economy.

Previous ArticlePatika helped my business get back on its feet, after the effects of the pandemic